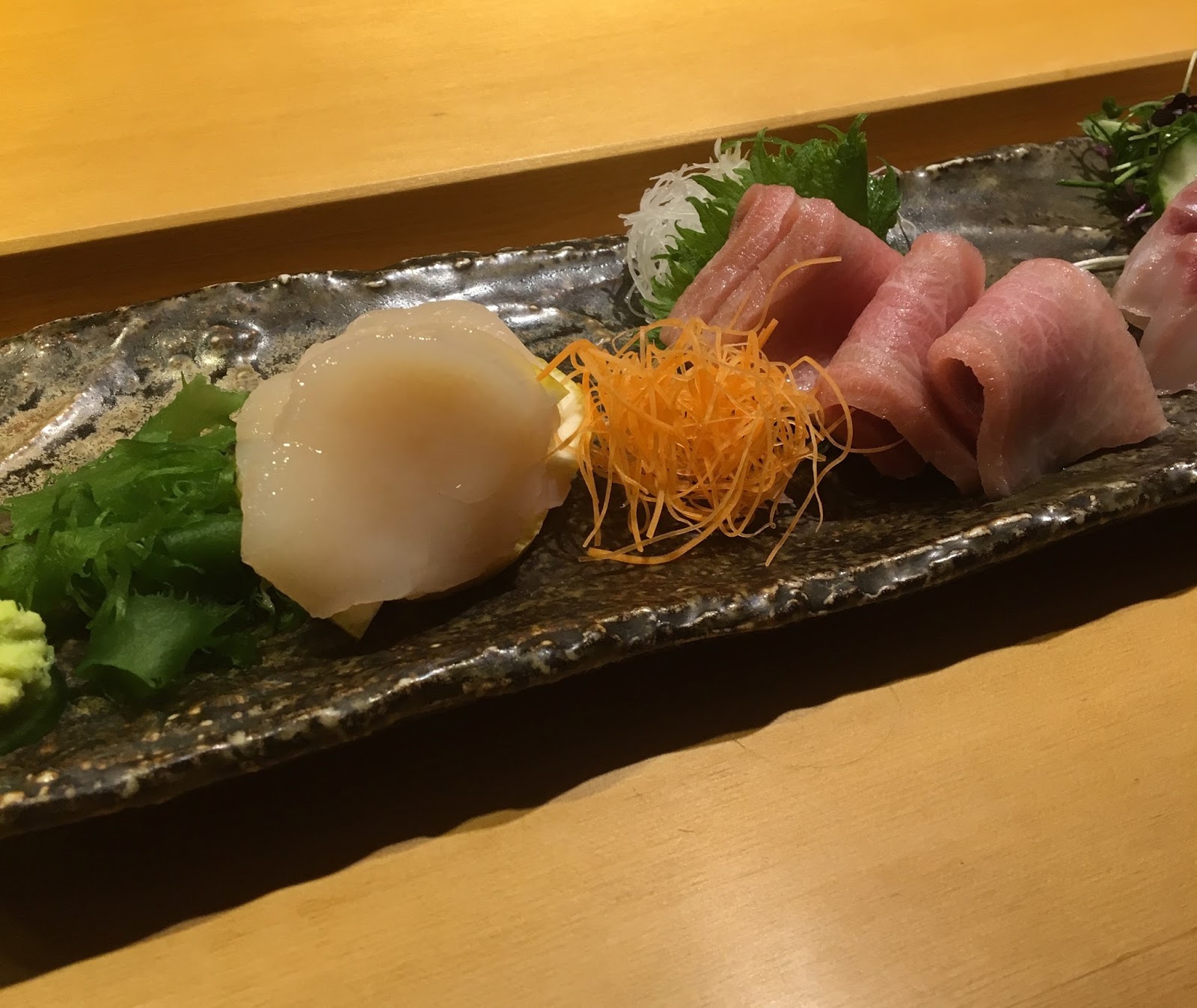 It’s been awhile, hasn’t it? A while since I’ve trotted out a restaurant review, that I’m not sure many people will take the time to read.

Why it’s been so long, I don’t quite know. Possibly, because I’ve been eating out a lot less lately, possibly because every time I’ve put ‘pen to paper’ I’ve bored myself within the first five lines - and, that’s never a good sign.

Writer’s block, they call it.

Either that or I’m just not cut-out up for this food writing lark.

Regardless, I decided to struggle through for Sushi Tetsu and - at least - try and write something that didn’t send me to sleep. Let me know if it works for you too.

I’ll confess, right now, I’ve never heard of Sushi Tetsu (but, as we know, I’ve never been a well-informed food writer; if I can even be called that at all).

A massive thanks has to go out here to Steph who picked up a fair bit of the tab. I’ll buy the next one, I promise.

The question a price like that raises, in this instance anyway, is how good can sushi really be? Can something that you can now pick up at almost every sandwich shop, for about £6 really be worth 10x that price?

God, if I was any good at this, I would make a case for, a case against, and draw a line somewhere down the middle.

How good can sushi be? Very. Can it ever be worth that much? I guess so, because enough people are prepared to pay for it.

But, the value of food really depends on the situation. The venue, the company, the time, the place, your very own mental state. Not just a cost / taste analysis.

A McDonald’s is pretty good, when it’s cold and crappy outside, your useless football team have lost at home (again), and you’re craving an overdose of dirt cheap fat, sugar, salt, and caffeine. Meet me last Saturday and just try to tell me those things aren’t some of the best life has to offer.

Good sushi - or even great sushi - has a subtle flavour. It’s not going to bowl you over, slap you around the mouth, and announce itself like a hideous, bloated, bald racist on his first day as President.

Nope. It’s going to play gently across your mouth and, if you focus too much on anything else - lights, music, booze, the idiots at the table next to you arguing about the bill - then you’ll miss it.

The culinary equivalent of blinking at the Formula 1.

Sushi Tetsu provides exactly what you need here; the perfect scenario to appreciate the quality of each dish. A cross between a massage parlour (a genuine one, not a seedy one), an upmarket bar, and a phone box, it’s tranquil, it’s quiet, it only has seven seats; and, if one of them is occupied by a total gobsh*te, who spends the whole meal yakking away about his life, opinions, theories, and trips to Morganville, then I imagine it’s pretty damn annoying for everyone else.

Yeah, sorry about that.

So, seven seats. Yep, you heard me right. That’s all Sushi Tetsu has. It’s a phone box of a venue and, if you’re looking to book, you need a fast dialling wand, some dirt on the chef, or a slightly geeky friend who can build you a Twitter based alerting system that texts you when a table is free.

I kid you not.

This really is a thin sliver of a restaurant, where even a medium sized-man has to squeeze sideways between a pillar and a post to make it to the postage stamp of a toilet at the back. Seven seats, arranged along a bar, behind which the diligent, patient, highly professional chef works tirelessly to prepare (what looks like) the best quality fish going and serve it directly to the total opposite staring back at him.

The waiting staff, float between the diners, top up their water, answer their ignorant questions with a patience equal to the chef, and try to tempt another drink down their throats.

Why am I boring you with the layout and a description of the staff’s meticulous nature?

Well, I’m trying to portray the atmosphere, because that’s what this place is really all about. The food is great. I’m sure if you know sushi, you’ll say it’s even better. Served from a plastic tray, accompanied by a tiny folk and a small fish of soy sauce, you might not tell the difference; but, that's not the point (have I made that clear?).

Sushi Tetsu is cosy, yet relaxed. A meditation chamber (I think Steph called it) of a place, the lights, staff, sounds (lack thereof) - except for that loudmouthed idiot (sorry again) - create the perfect tranquil state; where time stops, you feel lightheaded, you’re prepared to trip right over that £65 line, go mad and order the octopus sushi.

Which, they didn’t let me have. Damn them. If I shouldn’t have the octopus, why is it on the menu?

Ah, who cares. Basically, if you don’t know your sushi, be prepared for a few mild embarrassments like that.

We tucked into three sashimi, first; oyster, tuna, and sea bass (I could be wrong), each changed on every bite by the application of more or less wasabi, freshly ground from the fat green root sat on the chef’s table.

The first plate gone in seconds - this meal felt like it would all be gone in a few seconds more (and don't worry, this review won't take much longer).

Mesmerising, his hands dancing back and forth across the counter stopped even my conversation. The occasional flame joined the dance and licked intricate patterns across delicate, succulent, seared beef-like tuna.

Finally, the sushi rolls of salmon and tuna were beautifully massaged into shape in front of us and finished as quickly as they were sliced.

And, then we were out. Through the door, complete with 20% more bowing, floating back along the dark alleyways of Clerkenwell.

It was like a massage. It felt like a therapy, with a light touch that left a heavy mark. It seemed like a dream. I wanted a whisky and I wanted to sleep (what’s new). Strangely, all that transfixed staring, that distinct lack of chewing, suddenly felt like it had been hard work, reflected in the wallet and the eyes.

Maybe it was a dream. I half expected to turn back and see the entrance replaced by a different shop, selling forbidden objects and frogurt; but, given how many people have since mentioned the place, I'll conclude that it was real. To be honest, it might as well been a dream, as I doubt I’ll be back - wiring up your mobile to a Twitter feed in the hope of a last minute cancellation just seems like far too much effort for a lazy man.