It's the year of austerity. Or possibly the decade. Government spending strangled. Every corporate penny squeezed. But there is such a thing as a false economy when it comes to savings. Take tourist attractions. They cost money to run and don't usually make that back through entry fees, gift shop purchases, or donations. However, they benefit the wider economy - people have to eat, drink, buy souvenirs, and the places which serve them have to be staffed, owned, run and pay money to the local exchequer.

The Covered Market is one such tourist attraction. Mostly hidden from view, this is the Grand Bazaar of Oxford. Independent middle class shops a-plenty selling shoes, meats, cookies, coffees, and much more. The council want to tax it though. Raise rents to cover vital repairs to the ageing infrastructure. Most shops are aghast, fearful that rising costs will put them out of business. 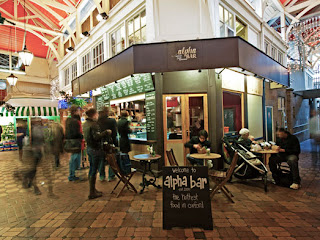 This would be a disaster to Oxford. Already this historic city's streets are adorned by the big high street brands. Starbucks and Pret both have two outlets within a prawn sandwich throw of each other. Burger King, McDonalds, and KFC blight the busiest street in Oxford with luminous signs, late night openings, and endless litter. Meanwhile, the near perfect Alpha Bar and Sooshe are hidden away from view, to be discovers by students in their second term and those tourists who wander far enough from the beaten track. 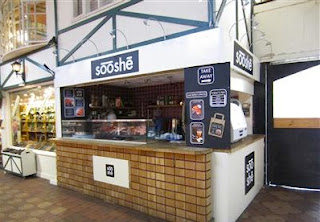 The council should be encouraging these local businesses, not hindering them in their attempts to offer an alternative to the High Street fare. Freeze rents, put up some massive signs to the covered market, and push even more tourists through the door. Get them emptying their pockets in the independents and avoiding the tax dodgers and the corporate whales which swallow the high street gulp by gulp.

To those who already know and love the covered market, get in there more often. To those who don't, visit now before its too late.

Email ThisBlogThis!Share to TwitterShare to FacebookShare to Pinterest
Labels: Alpha Bar, Save The Oxford Covered Market, SooShe, The Covered Market