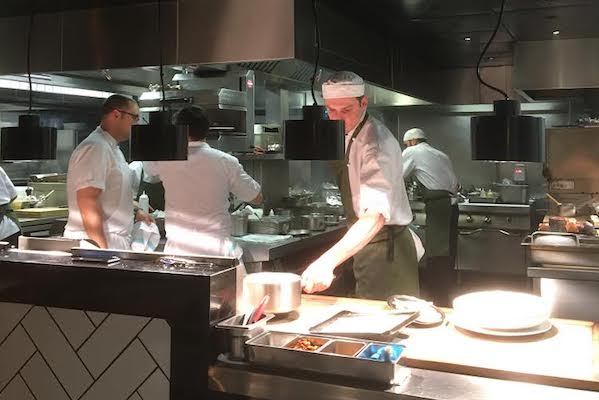 This really isn’t a blog, is it? To qualify as a blog, I think you need some degree of regularity in your posts and what are mine? Months apart?

Yeah, the last one was in February, so I’m on for sixth in a month. That’s a pace so far removed from blogging, it’s glacial.

You also need some knowledge on the subject, don’t you? Or - at the very least - a passion for it.

I love food, because it keeps me full (for a short while). I love food, because it’s tasty. And, I love restaurants, because they provide the food. I’m not particularly passionate about them, as an industry. New openings in far-flung East London archways and the latest fad cuisine of an Inuit take on Peruvian street food, I really don’t care for.

So, what you’re only ever reading on this website is an uninformed ramble, by an ill-educated (when it comes to food), passion-less, permanently hungry keyboard jockey, who wouldn’t last five minutes serving tables, frying steaks, cutting up vegetables, or washing up.

Actually, that’s not true. I once washed dishes for 8 months. It felt like prison.

As ever, this is a long winded way of getting to the point - which is this: if you’re a chef, foodie, or a random passerby, someone I know or someone I don’t, please don’t be offended by anything you read here, as what I say carries very little meaning and even less weight.

Anyway, on to Social Eating House.

I have to be a bit careful here. I was taken here for my birthday, didn’t pay a penny towards the meal, and already had a few cocktails before we arrived; so, I’d better be careful what I say.

Hands up if you’ve ever eaten at a chef’s table? Some of you? Yes? Good.

Well, for those who haven’t, it’s simple - you sit in the kitchen, quite near the pass (the bit where the head chef checks the food before it goes out), close enough to see the meat sizzle, feel a little of the stove’s heat, and hear the c-bomb whenever it’s dropped.

And, boy, was it dropped!

Well, twice; but right after I complained (quite loudly) that the chef hadn’t used the c-word yet.

Social Eating House is one of Jason Atherton’s restaurants. That means it could be excellent, as it was at Pollen Street Social (aside from that awful excuse for a pudding) - or, it could be fairly ‘meh’, at it was at Sosharu; so, I drew a line down the middle and expected it to be good.

And good, it turned out to be. Very good, in fact. Not excellent (that’s a rare score for this skinny Michelin Man wannabe to give); but, a ‘very good’ from me is that kind of score the chef should print out and stick to the fridge with a magnet.

Starting with mackerel and finishing with milk tart, we took in a series of ‘modern European’ dishes of rabbit, sea bass, foie gras, and the like. You know, that sort of English meets French food, all done posh, and served in very small pieces - except for that foie gras.

Man, was that a lot of liver. Too much for me. I find foie gras sickly at the best of times and I was far happier with the root vegetable broth it was floating on. Mmmm...broth. I really am a peasant at heart.

The rabbit, I found disappointing - quite bland in the main, but with the odd burst of a slightly unpleasant flavour I couldn’t quite put my finger on.

The sea bass, on the other hand, was fantastic. If I remember rightly, it sat on mash. Rich, creamy, butter stuffed mash. I really really am a peasant.

To wash this all down was wine - lots of wine and some French pear cider, which seemed to arrive just at my glass was empty. Perfect timing.

And, in a way, that’s the real point of the chef’s table experience. It’s less about the food (although, obviously, that’s still massively important) and more about being treated better than the other customers. You’re not just any old schmuck, but minor royalty for a couple of hours, sitting behind a curtain that says ‘No Entry’ and given a private performance by the entire kitchen staff.

Sure, the rabbit was odd. Okay, the foie gras wasn’t for me. Put all that aside, though, as for two hours this peasant felt way more important than usual - and, better yet, he wasn’t paying a penny.