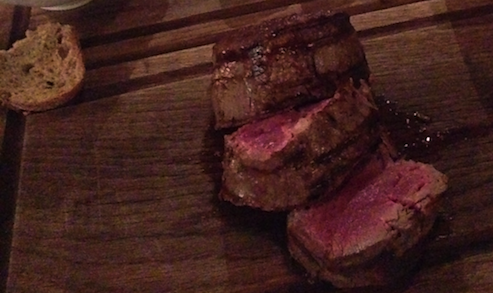 
I'm sure I'll enjoy being spoon-fed when I'm 80. At this age though, it just wouldn't seem appropriate - although the staff at Gaucho in Leeds might disagree, coming as close as is possible to offering that service without actually shoving a forkful of food down your throat.

One of a chain of Argentinian steak restaurants, Gaucho sits in a plush basement along Leeds' smart looking Park Row, a couple of doors up from the Slug & Lettuce - that purveyor of the finest generic lagers, pints o'wine, odd smells, and 2-4-1 chicken tikka on a Tuesday. Delightful!

Once seated, the spoon feeding begins. Your Gaucho waiter will deliver a non-optional description of every steak they offer, the geography of Argentina, and later the cheese. Granted the last one is necessary as you need to know which of them smells like feet; but the other two were definitely not.

I get it. It's steak. It comes from Argentina. You sell it and you're very proud of that. That doesn't mean I want a tray of your finest cuts - looking like something from a pathologists lab - thrust under my nose. Nor do I want a geography lesson on the topographical differences of a South American country. I just came here to spend someone else's money and eat! Help me out here!

Aside from the primary school lesson in ordering steak, Gaucho succeeded at the one thing I didn't expect it to - ceviche - and failed at the one thing I did - steak. That's a problem for a steak restaurant, granted. The ceviche was light, refreshing, and crisp, with the only negative being the poor slices of scallop which struggled to find a way through a deluge of chilli. The steak, while large, mouthwateringly good to look at, tender, and cooked to perfection, offered almost no taste - not even a hint that this was once a cow. With the edges trimmed, the rarest of the two pieces could have passed for tuna.

Such a disappointment for a restaurant that with a sleek black interior, mirrors set at every five paces, cow-hide covered chairs, and prices on the high side for London promised so much more. The abundance of salt that covered every side didn't help much either, although it could have been a poor attempt at injecting some flavour into the dinner.

When the cooking is good, but the taste not, fingers point towards the ingredients. Argentinian steak is praised the world over, and rightly so. Succulent, tender, flavoursome. I know as I've eaten it locally and could point to where if she held the map up a little longer. Steak cut with a spoon is possibly one of my most over-exhausted stories. However, here its quality failed. A cheap cow chosen to reduce the import duty or transport costs? Who knows. I don't know anything about buying steak from abroad. It just didn't work, and perhaps that's no bad thing.

While I'm not some militant local food activist, there's something not quite right about finding Argentine steak in Yorkshire. Gaucho made a song and a dance about the local heritage of their cheese. It's local, it's from a cow, so why can't their beef be? In London the Ginger Pig thrives, dragging meat in from across the country. Yet that same meat bypasses the centre of Leeds and a restaurant a tall cow might be able to spit on from the heights of the Dales. Such a shame and such a wasted opportunity.