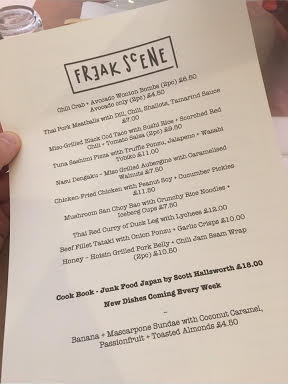 The world of food annoys me, which is why I've never really tried to elevate this blog above what it is: a place for occasional ramblings about something I ate.

In a way, I'm happy in my annoyance. The food world can do it's own thing, somewhere over there, and I'll do own thing over here.

From time-to-time, it encroaches on me, though. Uninvited.

Generally, it's a classic foodie post that will flash up on Instagram - it's picture perfect angle, lighting, shade, and texture not giving any indication as to the quality or taste of the dish; the text below, some meaningless platitude or name-drop of a chef, including the word 'that' - with strong emphasis.

But, on rare occasions, it'll be someone who works in the industry that catches me, in the real world, pinning me down (not literally) and boring me to death about some trend, food, detail, or knife sharpener.

This time it was a budding young-(ish) chef telling me about a burger.

I don't want to do him down. I don't want to stifle his career (ha ha - as if I have the power). But, if there was one thing I could have been bothered to say to him (albeit from a position of admitted ignorance) it's that you should really listen to your customers.

Burgers are done mate. Snore off. Which, as a potential customer, is the basic gist of my argument.

Well, two things spring to mind. One, if you do that, you're an idiot. Surely, it'll be the most expensive burger that no one can afford, even if they wanted to buy it. So, you're cooked as a business. Two, if you manage to use the best ingredients money can buy and - miraculously - keep the price reasonable, then kudos to you. Still, it's been done. The ‘best’ burger is out there somewhere and people aren’t really that bothered about it. After all, it's a burger. How much better can it really be?

Ah. What am I saying. I shouldn’t do down someone’s dream. We all have them, no? Even if it’s only to run out on the field during a baseball game.

So, good luck to him. God loves a trier and all that. And, who knows, maybe the burger is due another shot in the arm, to boost it to levels I can't begin to imagine, while keeping it cheap enough to suit people's pockets.

Watch this space, I guess. Although, I'm really not sure I'll be visiting, regardless of how great *that* burger is said to be on Instagram.

Anyway, I know all three of you are asking yourselves, how did we even get here? Wasn't this meant to be a review of Farringdon’s latest food pop-up, FreakScene?

Yeah. Sorry. I tend to do that. Surely the three of you know that by now?

I'm sure I can join my rant and this review together, though. So, here goes.

What that chef should have done, is ignore his blinkered obsession with his greatest burger of all time and get his arse over to FreakScene, to see what people really want to eat.

They describe the food as pan Asian, which it is. Lots of chilli, lots of pork, lots of rice, you know, Asian food. And, if you know me at all, you'll know I'm not going to run through each dish; more just pick out the highlights, before I get too too bored of my own voice - which’ll happen very very quickly (don't worry).

I can’t go any further without mentioning the beef fillet Takait with onion ponzu. I have no idea what at least two of the words in that description mean, but whatever they mean translates into f-ing deliciousness in your mouth. Seriously, this is one of the best dishes I’ve eaten - not this month, not this year, not this decade; just ever. The beef, so tender, so succulent, so warm but so rare. Whatever sat alongside it was the perfect balance of sweet, spice, and salt. Just all-in-all mouth dribblingly insanely tasty.

Frankly, I don’t know what you’re doing still reading this. Get to Farringdon, get to FreakScene and order three of these - now.

Mild beef induced ecstasy over, let’s move on to the chicken. Vastly inferior to the beef, yet still a 9/10. That’s no slight on the chicken; the beef is just *that* amazingly good. Stick it on your Instagram and smoke it!

Oh yeah, the chicken, fried in chicken (work that out) and served with a peanut soy / satay style sauce, so thick it was like tar, so sweet it was like a pudding, so perfect I started licking it up with my finger (that might be a lie, but you get the point). The chicken itself, so tender you could strip it from the bone with a single stare. God, it was good. Although, the beef was better - get a pen and write that down, so you remember.

Every other dish, great. Marvellous. We finished every one we ordered. I’m not going into detail, though; 1) I can’t remember the detail, 2) you can read the menu above, and 3) I’m now bored of my own voice.

There’s only one thing left to do - plug the heck out of FreakScene and tell you (for the last time) to get there before it closes it doors for good. When you do, order *that* beef (just in case I didn’t say, it's great!).