Ikea is such a brilliant concept. Not because you can fully furnish a house for under £100, but because they make you do most of the work for them. You show up, stare at the displays, pick your own from the warehouse, go home and build. Once they automate the checkouts, staff costs will dwindle, and costs will fall even further.

In some ways, Burger and Lobster is very similar. "Wow, such edgy decore and such a clever idea", said the diners. No, not really. They just didn't buy lampshades, bulk bought at a gastro cash and carry, and did away with the menus. Next thing they'll have you collecting cold steak from the fridge and mincing it yourself. 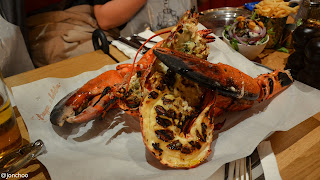 I might seem critical of their approach, but actually I'm just critical of the ease with which people are amazed. And I'll admit, I'm one of them. It is a genius idea. Do one dish well (okay, two dishes - lobster and burger), serve with a tasty salad, some fries (no options on either), and a smile - and sell, sell, sell! A lot of places will offer a menu ten times the size, which tastes a million times worse.