Even though the standard quiz night still seems popular, many pubs and bars are trying novel ways of enticing punters through the door. On Saturday 13th October, the Oxjam Oxford Takeover saw four venues in Oxford host an extensive list of local bands. A charitable event, but for each venue Oxjam brings a larger than usual crowd and the potential to gain some new 'regulars'.

The top floor of the Turl Street Kitchen - another charitable project at the north end of the quintessentially-Oxford Turl Street - is a private function space and makes for an intimate music venue. The ground floor bar set-out like a living room is open day and night, serving coffee to Mac browsing students who then return for something stronger later on. A large selection of whiskey is on offer and there are a couple of ales on tap, including their own Turl Street Stout (4.3%) and Rebellion IPA (3.7%). A good place to visit out of term time. 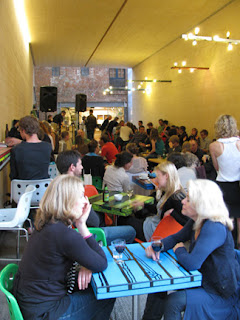 Next on the list was Modern Art Oxford - tucked down a small side street to the side of the Westgate Shopping Centre. A lively cafe which doubles as a bar, it's much better to visit during the summer months when the covered outdoor space ('The Yard') is set with tables and chairs. They serve beer from local brewers Compass Brewery and The Cotswold Brewing Company. The former offered up Baltic Night Stout (4.8%); a pleasant beer considering that craft stouts are often too strong in flavour. Possibly not one I would have chosen for a basement gig, but then for once I wasn't buying.