As is often the case, the choice on a Saturday night in Soho is dictated by what's available rather than what you fancy...restaurants that is.

Having previously tried on three separate occasions to pass through the entrance of Bodean's, this time I gave up on approach. The streets surrounding that honey-trap for pork lovers should surely be filled with many more options for those disenchanted by the queue or whose bellies have taken control. Instead, you find the always deserted Yo!Sushi and - due to it's almost night-black exterior - walk past Copita. 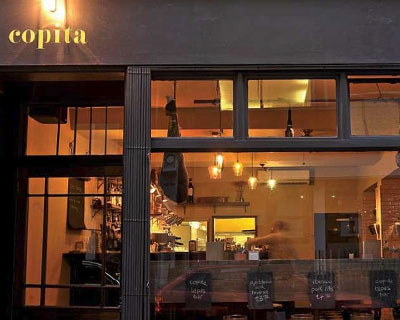 Perhaps due to the inscription of chalk promising pork, or perhaps the clearly vacant table, we found ourselves perched upon swaying barstools, casting eyes over an interesting yet short menu. As someone was busy slicing from a leg at the bar it seemed churlish not to order the pork sharing platter. At £30 this did seem cheap for three hungry people, but with no 'up-sell' from the waiter we thought it a good choice with only a single side of bread. How wrong we were. About a 1:2 ratio of meat to vegetable does not a pork platter make  Yes, we could share it. Yes, it was delicious  However, even gnawing the bones and chewing the last mouthfuls of fat, we needed more to compensate. Delicious beef and tempura fish duly arrived, along with a butternut squash dish which was a much softer texture than I expected. It's no pig though, and I was disappointed that seconds were required even after my chivalrous attempt to share.

Chivalrous and pork platter are not words which often go together.