Jumping on the Craft Beer Bandwagon

The rise of craft beer reflects the growth of the discerning drinker - a segment of the market previously reserved for round-stomached, long haired, CAMRA t-shirt wearing 50+ year olds, but now populated by the trendy, young middle classes. 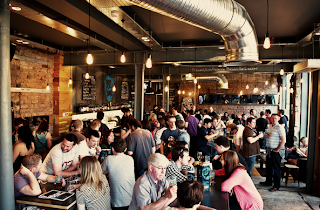 Not to miss out, big brand beers are jumping on the bandwagon fast. Fosters and Kronenbourg are two brands whose focus has shifted towards heritage and provenance.

Even with the vast expense of an Eric Cantona appearance, these campaigns are doomed to fail in attracting their target market. A discerning beer drinker is someone who looks for quality in the detail. Perhaps not to the extremes of knowing hop types and brewing times, but enough to notice the 'Brewed in UK' disclaimer stamped on both of these ads - suggesting that both the claims of heritage and provenance are complete bollocks.

Beers ads generally focus on humour, shock, 'being clever', or a combination of all three. This is because the brand name alone is the only differentiating characteristic between the various yellow swills. The goal of the ad is then to scream the name so loud its bored inside drinkers' heads, and rests on the tip of their tongue waiting to be shouted back at the bar come Saturday night. The people for whom this mass marketing approach work don't care about a product's provenance or heritage. They're the people who buy Magner's, not because it's Irish or made of apples, but because they've been told to do so while watching Coronation Street or the Champions League.

Big beer has lost the plot, falling in to the classic trap of attempting to tap in to a growth market by taking an existing product and twisting the image to fit the square brand peg in the round hole of consumer demand. It's a ridiculous strategy that will never achieve its goal. Any increase in sales will come purely from the increased exposure, not people running to the pub hollering 'it was founded in 1888 dontchaknow!'. However, I'm sure this won't stop them trying to hijack the next trend - organic Foster's anyone?