I wasn't in the best mood for a trip to Liverpool. Three hours sleep and then a three hour train ride up to watch the inevitable capitulation by my football team. At least it was sunny.

Liverpool is a strange place - a hugely redeveloped pin-sized city centre attempting to counterbalance a sprawling donut of hideous estates. On a match day, it's a stranger place still. Hundreds of clueless tourists and southern-scousers making their one trip of the year to Anfield. Adorned with armfuls of branded tat, stopping to photograph every crack in the pavement, clutching a copy of the words to 'You'll Never Walk Alone', they hold their nose and close their eyes in the taxi to ground and make damn sure they're back for the 5.15 to Euston.

As footballing experiences go, a trip to Anfield is the perfect pink Barbie doll that Sky Sports want the Premier League to be. 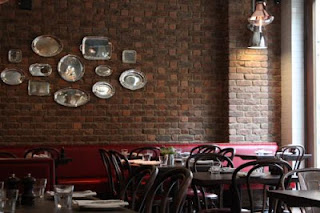 And so to the food. The Hanover Street Social was the call for an 11.00am breakfast. 'We don't serve beer until 10.30am', said the waiter in thick scouse. Presumably after flag-stoning the entire city centre, the council will turn their attention to education. He then informed us that as they were busy (half the tables were full) they couldn't make specific additions to the breakfast. You can have any breakfast you want, as long as it's black.

I was pleasantly surprised by the taste of the breakfast, all six mouthfuls of it. So this wasn't the venue for the world's largest, greasiest fry-up, but I expected more than two chipolatas and a single piece of mushroom. Strangely they were accompanied by a saucer-sized black pudding. All-in-all, a terrible balance.

Moving from a place which describes 'being social' as more than just a political ideology - a bizarre nonsensical statement with which to advertise your restaurant - to one where communism rules supreme: from each according to his own (Sky Sports) to each according to his need (the people of Liverpool). Cafe Sports Express in the aptly named Chavesse Park shows football from (channels) around the world on it's twenty-five televisions, accompanied by a chef on a whistle announcing when another Piadina Carragher is served. I'll say no more.