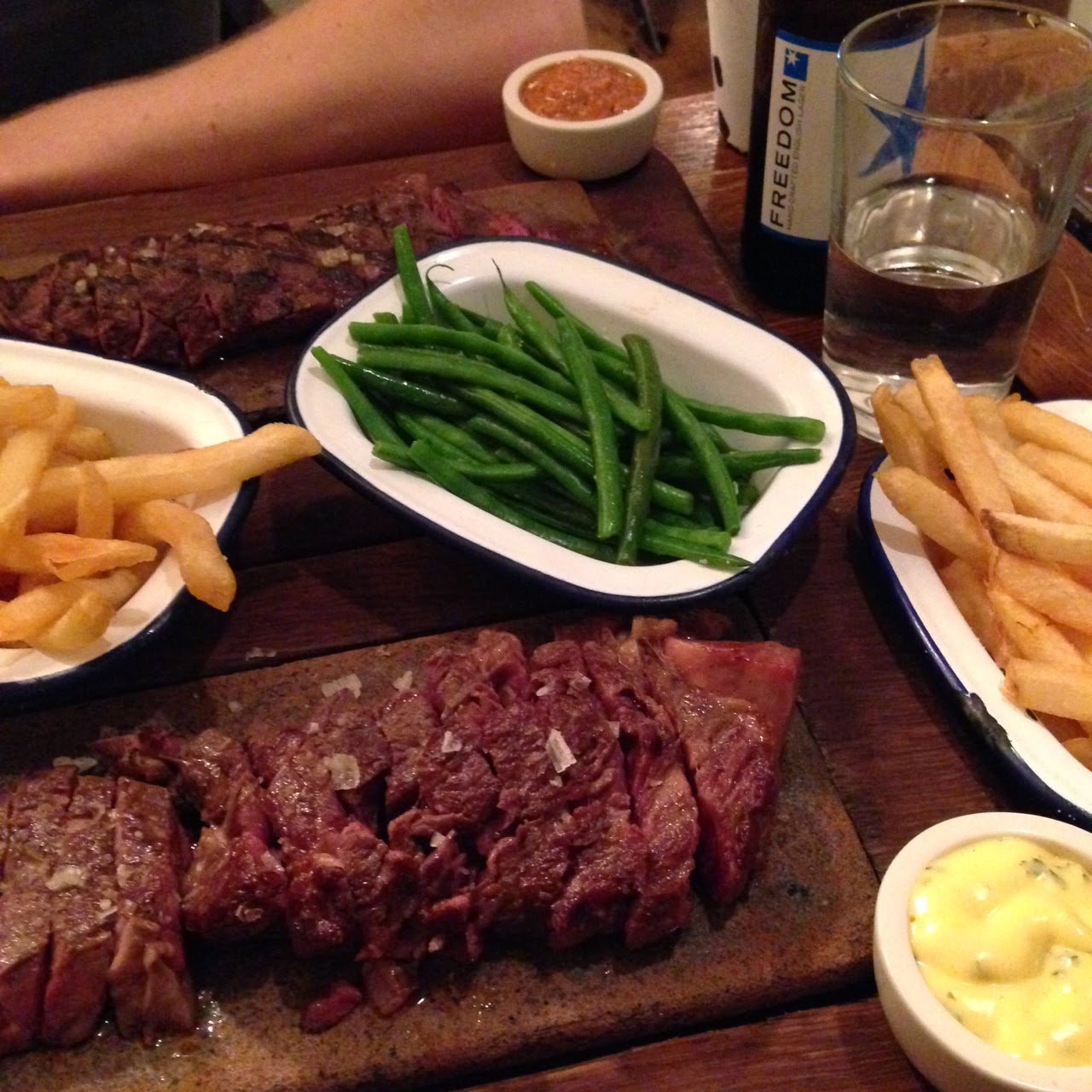 
Steak, it's great, ain't it? A simple to cook cut of meat, packed with delicate flavours and a deeply satisfying texture. Cooked properly and seasoned well, it requires nothing to enhance it's flavour, any accompanying sauce reserved strictly for chips.

Steak is a dish that makes me happy, leaving a big grin on my face and warm feeling in my stomach. Flat Iron should have me beaming then. A restaurant devoted to simple steak, with simple sauces and simple sides. Unfortunately, it didn't. My smile, firmly an upside down frown in reverse.

Oh where, oh where to begin. This was a monumental disaster of an experience. Were it a football match, it would be a 4-0 thrashing, at home, with three red cards, and seven broken legs. So, like Match of the Day, let’s walk through it, the pain and the absent glory from the first minute to the last.

On arrival, we squeeze through the small door to find a small queue. Oh wait, no it's not a queue, rather two men attempting to pay their bill in the doorway (strange, but understandable given what came later). Ahead, two waiters, chatting to each other. Joking, to each other. Anything, with each other, but the job they’re paid to do. It’s a shaky start.

Next, we’re led downstairs to the small basement bar. Three beers ordered and charged to our table. Wait? I’m sorry. We can’t do that? No, you mean you won’t do that, not that you can’t. ‘Computer says no’ in a bank, ‘waiter says no’ in a restaurant. Get a grip. This isn’t McDonald’s. Stick it on the tab, like you’ll do with all the food I order and all the subsequent beers. Foolishly unprofessional attitude to running a restaurant.

A ten minute wait and we’re back upstairs, marched past the long benches and squeezed into a small box at the back of the room. I’d keep brooms in here, not a table and three chairs. We order three steaks: one, their standard £10 Flat Iron steak; one, a £15 Bavette; one, a £20 rib-eye. The waiter rattles through the menu at alarming speed. His face red from the lack of breath taken. He ignores one important distinction between the three steaks on offer - the weight. When quizzed, he regurgitates these too, albeit in two different measures, leaving me to do the calculation. Bizarre.

The waiting staff here are trendy. Super trendy. Uber trendy. The level of trendiness that stinks of arrogance and delivers an almost apathetic attitude in every word. It’s as if they don’t want to be here or, at least, they don’t want you to be here. Remember pal, it’s people like me showing up and paying that keep you, your skinny otter-skin boots, and your sustainably sourced earrings away from the labour exchange. 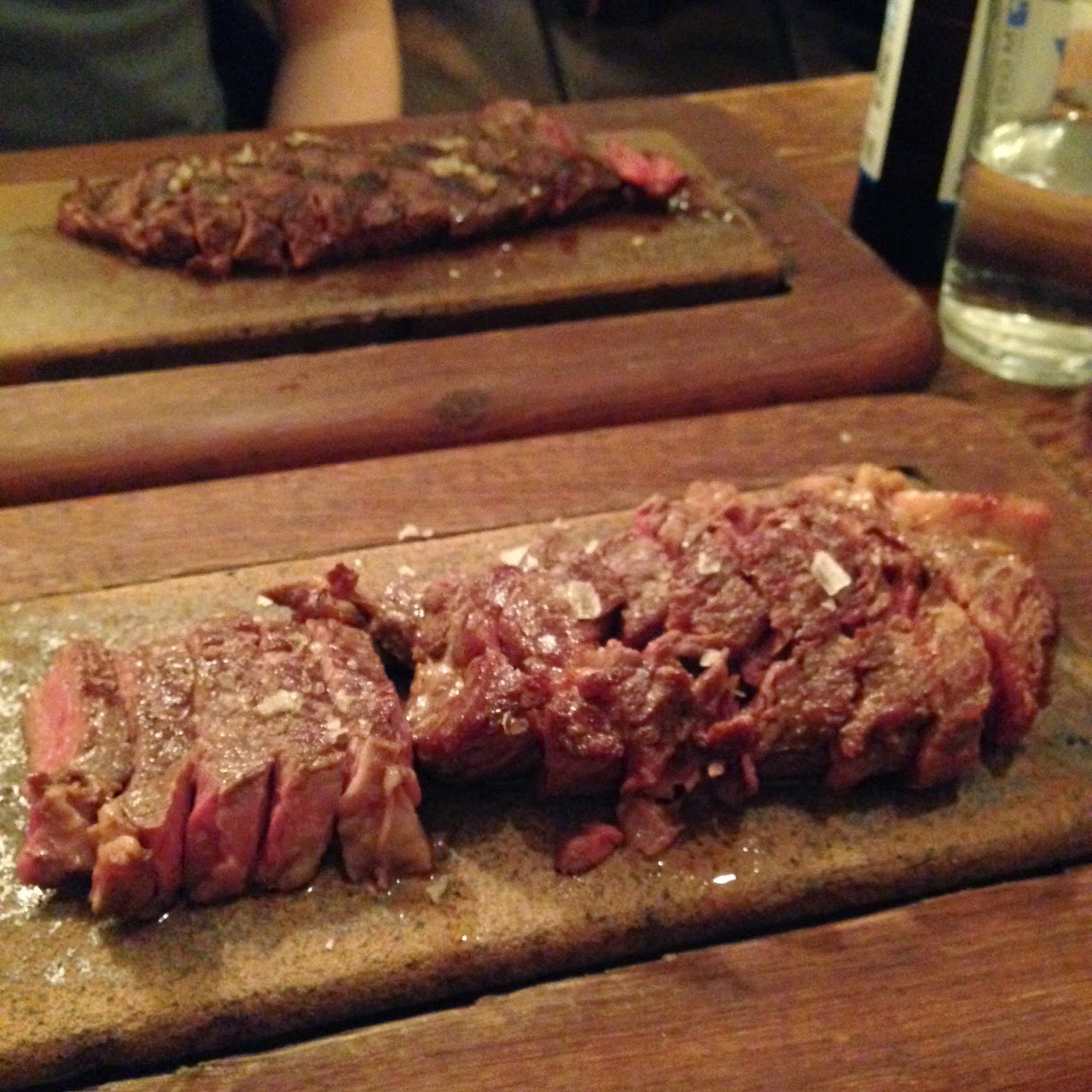 Like football, a meal out is a game of two halves. Service and food, split equally. The first 45 minutes, they lost. Terribly. Perhaps in the second Flat Iron can turn things around? Um...no. No they can’t. The food looks terrific. Wooden platters, with stone centres, hug the steaks lovingly. Small pretty bowls of salad, chips, and greens. It’s a beauty, but all style and no substance. All three of the steaks were woefully underseasoned. Bland as ricecake. The Flat Iron, chewy. The second steak, soft and succulent. The ribeye, wow. What an incredibly awful smell. I like my steak beefy, but this smells like it’s come from a part of the cow that’s usually left sat in the field while the animal is still living. Honestly, stomach turning. The chips too: boring and bland. The sauces, fine. The greens, great. The salad, tasty. What do people come here for though? Steak or the vegetarian side-plates?

At the final whistle, we’re hugely disappointed. As fans, we’d have left at 78 minutes. We couldn’t even leave at 90 though. Not penned in by police, but stalled by the waiters. Again, chatting. Again, to each other. Again, ignoring the people with money in their pocket and a bill to pay. What do I have to do to give you the money you so desperately don’t deserve? Christ, what a car-crash.

As we left, I asked for a quick comment on the food. The verdict? The beans were the best bit. Surely, six of the most damning words a steak restaurant can hear. Your line-up of ace steak strikers, defeated by the limp-lame substitute greens. Says it all really.