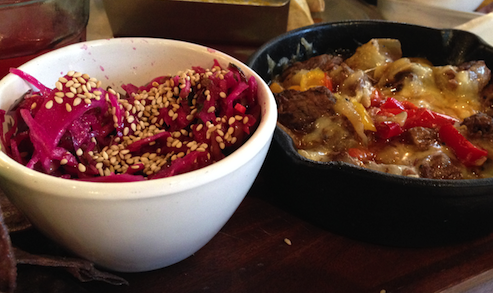 
Notting Hill Carnival is a parade of colour through the streets of a vibrant, eclectic, and wealthy district of London. Or at least that's what I've been told. I wouldn't know, as on Monday I was confined to an East London flat by torrential rain and a hangover. It turns out the sorrows from footballing disasters (and boy, was that a disaster) can easily be put to be bed - drowned, if you will - by four pints and countless rum and cokes.

Instead of becoming the embodiment of one stereotype, chugging cans of Red Stripe while sheltered under a golf umbrella listening to reggae, I threw myself headfirst into another and trooped around East London, drinking coffee, visiting a charitable cinema, and eating at the latest foodie hot-spot. Insert line about beards, fixie bikes, etc, etc.

DF Mexico seemed to spend at least a week crowding my Twitter feed; thanks in part to it's colourful interior that attracted @mat_buckets, but more so from a visit by @JaxxNelson, that then descended into a 582 tweet-chain with the restaurant. Clearly, this was a place that had to be visited and given that I was going for free, floods of biblical proportions and a hangover to match were unlikely to stop me.

@Mat_Buckets was spot on with the interior. DF Mexico doesn't stray too far from the stripped back industrial chic of the neighbouring coffee holes, supplementing this with the colour yellow, a lot of plants, and so many lights I'd wager they bought shares in Habitat before it collapsed. I can't complain, I liked habitat.

The more I eat, the more bored I get of ordering. It's a hard life, I know. Just £2 a month is enough to buy a food blogger a long black in a take-out cup. Please, call now. On this occasion, I let Little Miss Very Very Excited order all that she thought I'd like. We ended up with an overflowing table of chilli fries, corn, pork taco, steak and cheese 'alambres', guacamole and tortillas, and two hibiscus drinks - hey, I was hungover and this is East London, a man can get away with drinking that sort of thing here.

We'd overdone the carbs, that's for sure. Chips, corn, and tortillas. All delicious, but all too much, especially after the popcorn in the cinema. The latter, a bad idea in retrospect. The first of the mains (I say first, it all arrives at the same time), the pork taco, I ate quickly. We were running out of space on the table and my fat fingers aren't dextrous enough to hold a taco together once a bite has been taken, especially not one oozing with the juice of pork and luminous onions. Seriously, don't come here in a cream coloured jumper, not unless you're prepared to wear a bib and gloves.

The pork taco was great. Mouth melting meat, with a hint of fire, smothered by some sort of cooling diary product. The only problem was the speed with which I ate it - my fault - and the sizzling pan of steak and cheese placed on the other-side of the taco - their fault. Taco is all very well and good, but, but, but...steak! And...cheese! Also, the 'alambres' is a sharing platter. There was a danger that if I didn't move quickly enough, I wouldn't get my fill.

The platter is a DIY job. Grab a bread, stuff it was meat, balance some onions and guacamole on top, and insert your face. Hot steak with a smokey flavour, sweetened by the cheese, and disguised as healthy amongst the avocado and onion. Low in carbs too. The food of a Weight Watchers' king. That bikini body is only five whole summers away.

If I ran some form of rating system for the places I visit, DF Mexico would get eight thumbs up. Great food, good setting. I need to plan another trip, ditch the carbs, and have a true Mexican meat feast.