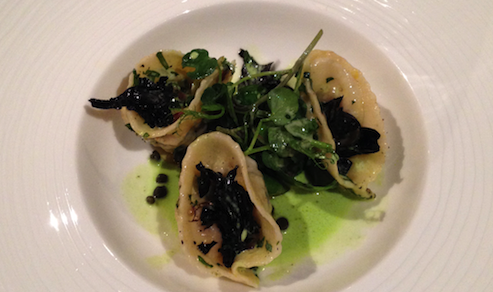 
Ludlow is a quiet town in a quiet county in a quiet part of the country. During the day, the market sells corn dollies and pig ears at 50p a pop, while in the evening the locals desert the streets, hunkering down in the pubs of both the quaint and slightly ropey variety. In the dim illumination of the sporadic streetlights stand door staff, so there exists the potential for excitement. On a typical evening though, nothing stirs along the roads of Tudor houses, the picturesque alleyways, or the gravel pathways around the local castle.

la Bécasse takes after Ludlow. It's quiet. Very quiet. On a Saturday evening, perhaps five tables of fifteen were occupied and a private dining room set for twenty remained undisturbed. It could be because there isn’t a huge demand for fine dining (price approximately £120 per head, including wine) or because the locals have been scared away by the hideous velvet artworks adorning the walls. Apparently, a local artist produced these pieces. Let’s hope they stay local.

As you’d expect from fine dining, the service was highly professional. Suited waiters floated effortlessly across the bizarrely bright carpet, delivering precise descriptions of each dish, keeping our glasses full, and rarely intruding unnecessarily. The scene was well set for an excellent meal - a five course taster menu, including amuse-bouche and a pre-dessert. Two puddings! That's my kind of place.

Unfortunately, la Bécasse really wasn't my kind of place; it was disappointing. I couldn't fault the presentation - small picturesque plates of food, a visual spectacle you didn't want to break with a fork - and on paper the dishes should have worked. The taste though, just wasn't there. An amuse bouche of celery and endive soup with olive oil ice-cream was diabetically sweet and more like a pint than an amusement. The chicken encircled with foie gras and the fried wild boar cheek were equally enthralling to read, equally dull to taste.

The only dishes to break this trend of disappointment were the river trout tortellini - although here the strong flavour was overpowering by the fourth forkful - and the pre-dessert of sweet cream and tangy fruit compote.

The final dish, a chocolate fondant, with cookies, and cinnamon parfait summed up the whole experience. Nicely described, delivered with aplomb, but ultimately failing to make an impact. A damp squib of an ending to what was a very drab meal. The interesting petits fours of deconstructed lemon meringue pie (deconstructed by being picked up, rather than by design) and an apple sorbet encased in a thick cracking crust of condensed milk were, if anything, rubbing salt in the wound. Clearly there’s a chef here who knows a thing or two about technique and the refinement of food, but only infrequently succeeds in transferring taste from the kitchen to the plate.