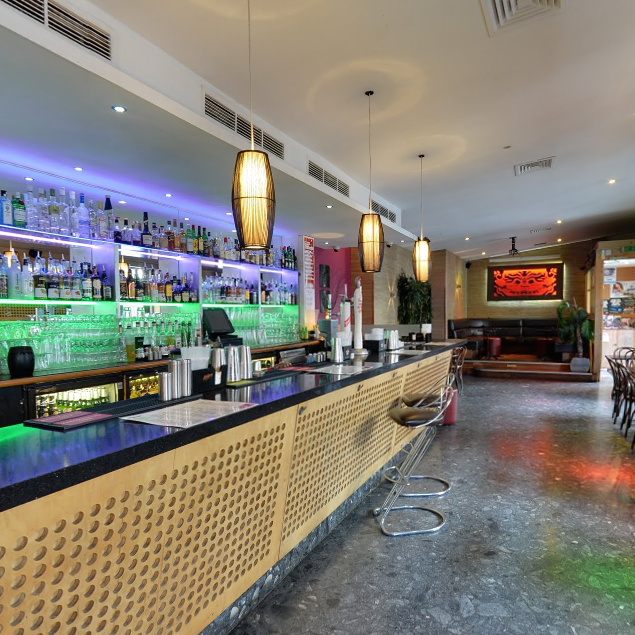 
There are certain conversations you should steer clear of at the dinner table, especially when eating out. Kidneys, for instance - the human kind, not those found on the menu - are a subject best avoided, yet that didn’t stop two fellow diners at Satay talking at length about various issues and disorders, with a particular focus on the symptoms. And yes, those symptoms weren’t pleasant. The issue with a conversation such as this - aside from the subject matter - is that it hooks the ear, each and every stomach churning word heard with absolute clarity and imagined in crystal-clear definition. Were this a discussion on interest rates, a cricket match, or tomorrow’s weather, my ears wouldn’t have twitched once.

While the conversation of diners in a restaurant can’t possibly be taken as a comment on the restaurant, the proximity of those diners can. Satay, on Coldharbour Lane, is clearly a popular place. Attempts to book before for a Friday evening have been met with laughter - not actual laughter, but the sort of reaction which suggests the request is a strange one - and even on a Monday night, most tables were rubbing shoulders with their neighbour. Feeling slightly befuddled from a birthday weekend, the noisy, busy atmosphere was not appreciated and the dim lights made my eyelids droop. Again, hardly the fault of the establishment, but an indication that this isn’t a venue for ‘all seasons’. The service was quick and pleasant though, with some advice given when a selection dilemma arose; although the suggestion that two bowls of rice were required for two people was way off the mark - there was another left to serve to the next table, providing their kidneys could take it.

Satay serves up South-East Asian cuisine: Thai, Malay, Chinese, Japanese, and more. There’s a lot of overlap with these cuisines, certainly; but there’s also enough of a difference to create confusion when they’re brought together in one place. I think of Thai as simple and fresh, with scattered sliced chillies; Chinese focusing more on dry spice and sauces; while Japanese is an abundance of raw fish. Satay was more of a mix of everything, together, on one plate. There really is a distinct lack here of the refinement found in the upmarket South-East Asian restaurants of Central London. That said, at £12 a meal (once rice has been added), Satay aren’t competing in the same market.

Starting with edamame and prawn crackers, there isn’t anything that can go wrong. Again, the portion size was impressive. The prawn crackers lasted well into the meal and wouldn’t have looked out of place at a party for twelve. The main was a left-field choice, chosen purely to satisfy a strange craving of the past few weeks. A whole sea bass sat on a bed of stir-fried vegetables, and seemingly stuffed with a handful more. The plate the fish arrived on was grossly undersized making more difficult the already intricate process of extracting the flesh. Needless to say, the table and floor were quickly strewn with mushrooms and peppers, although being with such low lighting no-one could have noticed. Unfortunately, the star of the dish was disappointing. The delicate flavour of the sea bass lost amongst some over-sauced, over-flavoured, and pretty much unnecessary vegetables. It’s instances like this that immediately bring to mind the overused adage about good ingredients - let them do the talking. Completely accurate though; a good sea bass can sing for itself and needs only hints of tampering - excellent examples are on offer at Etta’s Seafood Kitchen in Brixton Village and Mien Tay in Shoreditch.

Desserts in Asian restaurants are usually not something to stay for and given the nature of the conversation wafting over, that remained the case. The menu at Satay is tempting though, even after a dose of spice. English desserts - well, the sort found in the pub - were on offer, sticky toffee pudding, cheesecake, and brownie. Again, a chef that spends their life cooking with lemongrass, chilli, and a variety of spices, I would wager isn’t the most adept at producing these more post-Sunday dinner puddings, but I could be wrong and wouldn’t pass judgement until I’d tried.

With so much on offer in Brixton, including a couple of entries in the Good Food Guide 2014, Satay wouldn’t be a choice placed high on the ‘must eat’ list. It’s perhaps wiser to stick with the less adventurous dishes of green curry, pad thai, and Singapore noodles if you do visit, or make use of their bar and near endless cocktail list - especially during ‘happy hour’.