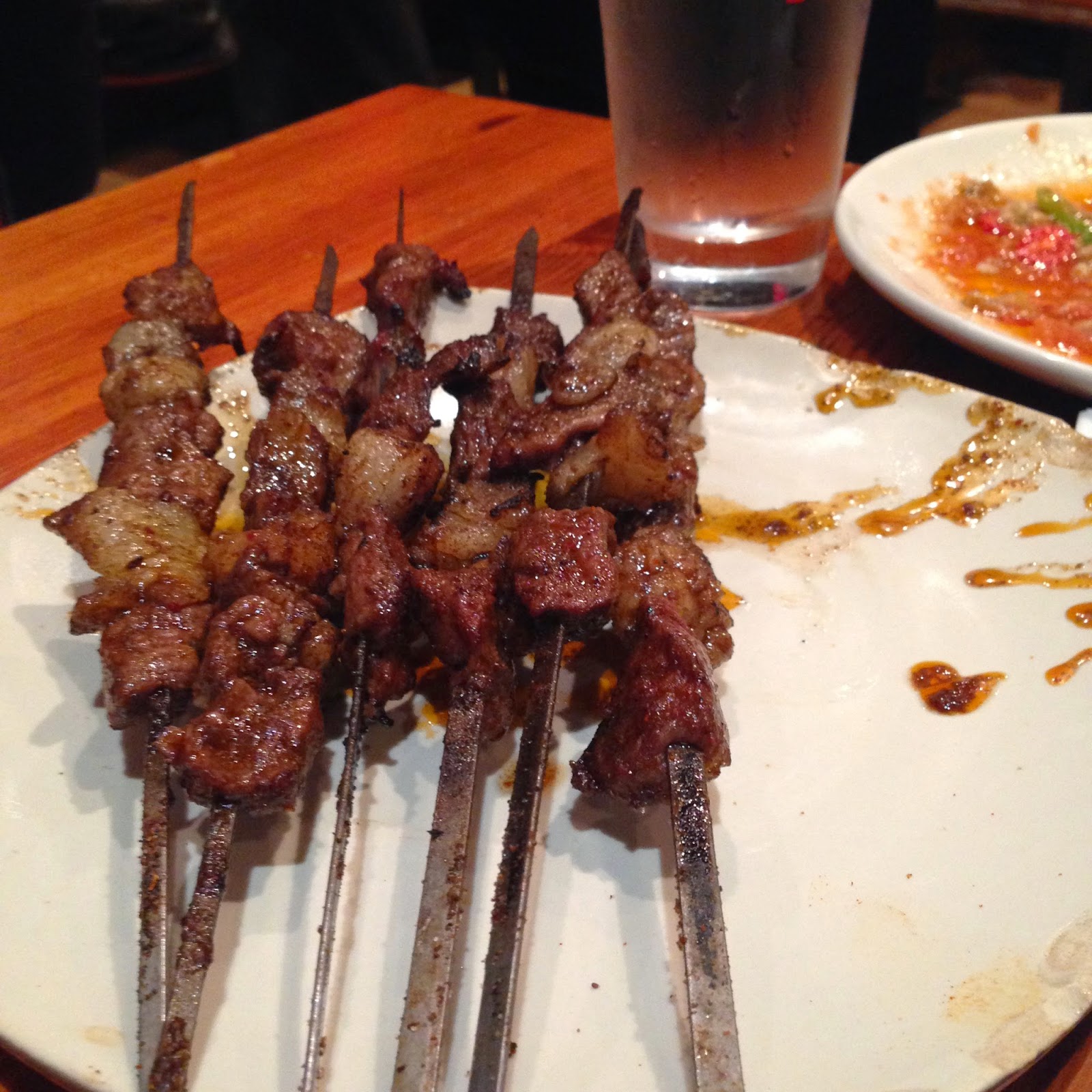 As the sound of tiny violins subsidies, I have to say, it's not all bad. The reason my Sainsbury's bill is so low each week is for the love of food and the search for a great eating experience. Silk Road in Camberwell proved one such delight, a reason to lift my chin and keep on eating.

I'm not knowledgable when it comes to food in London. I don't really follow trends or read endless copies of TimeOut and Observer Food Monthly. I'm lazy and rely on spoon feeding via a combination of Twitter and friends. Silk Road has won many plaudits and awards, but I'd never heard of it. Instead, adhering strictly to the rules of Supper Club, I headed out through the dank, dark drizzle to a pub I'd not been before, knowing not what I was about to eat. This is the best way to dine. No expectation really. Just the excitement of stumbling across a gem, without any of the legwork in researching the restaurant and booking the table.

Silk Road is a small-fronted, condensation covered Chinese restaurant in the heart of Camberwell, a place that seems to have more pubs, restaurants, and eateries than transport links. As a rule, Chinese restaurants are styled in one of two ways: overly ornate opium dens from the 1920s, where the menu is expensive, and the chairs are carved from the bones of pandas; white-washed rooms, with cheap laminate flooring, even cheaper food, and benches and tables stolen from a 1950s primary school. The latter is always the best and it's exact description of Silk Road. No airs, no graces, just staff in t-shirts taking orders, delivering food, and telling people they'll have to wait half-an-hour for a table.

A table of three, we ordered quickly and were delivered a conveyor belt of food within minutes. Cold roast belly pork, smothered in garlic and chilli was both first and my favourite. It was real roast pork, that tasted like leftover Sunday roast, chopped, and added to a marinade long after it was cooked. Lamb skewers, chilli covered aubergine and pak choi followed. The real winner was yet more pork, this time with black fungus, served in a light broth with greens included. So fresh and so moreish. 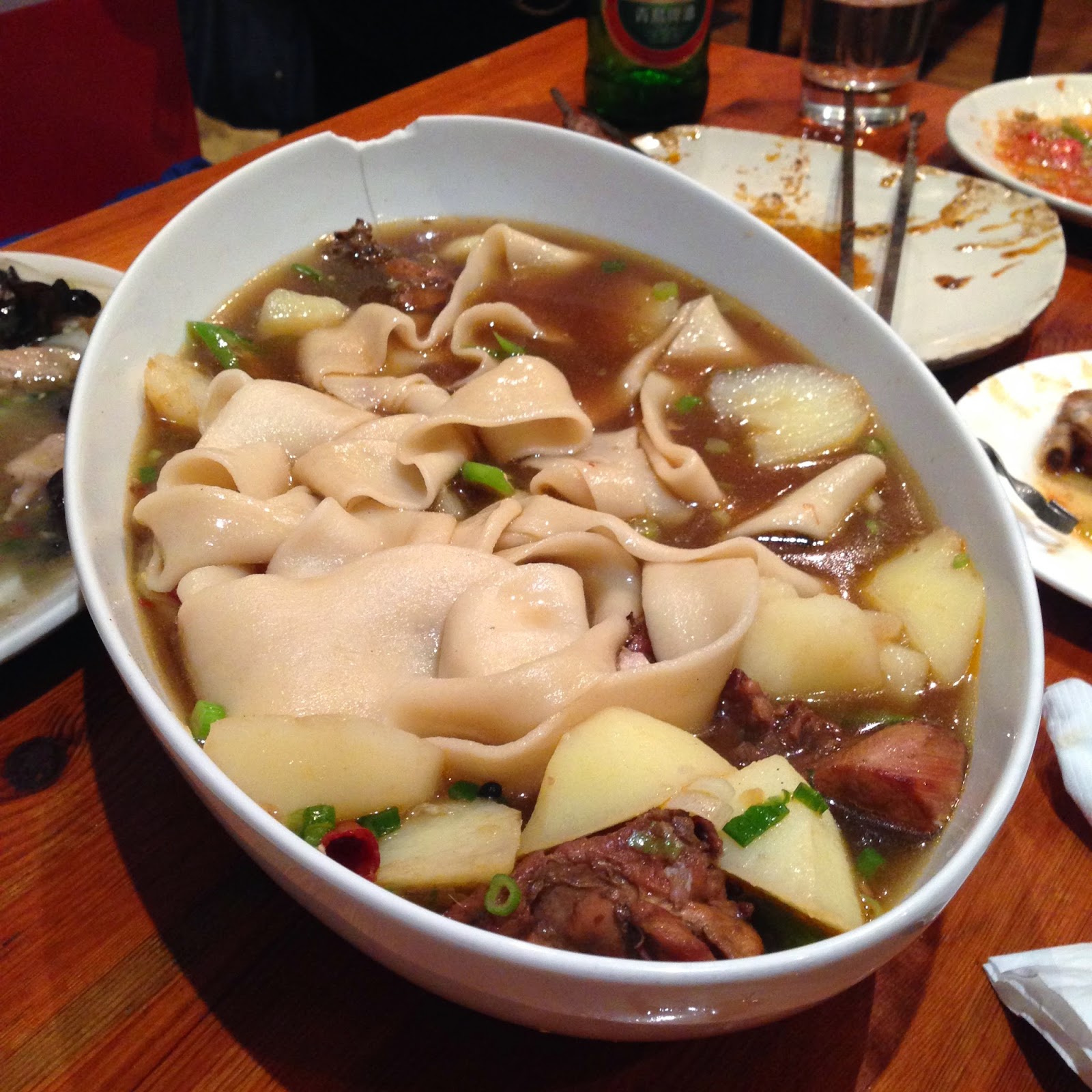 Finally, a medium chicken with noodles landed on the table. Who knows how big the large version is. Jay Rayner said it could feed two, the waitress was adamant that the large dish was overkill. To be honest, regardless of it's size, I couldn't quite grasp the fuss - and that wasn't the only thing. It's a tasty, spicy sea, with chicken, potato, and noodles floating in it. A frustrating dish, the noodles seem to come as one long entrail, leaving you fighting with chopsticks to make them small enough to extract from the pot. The chicken, with the bone, required too much fiddling and picking to make sure the small splinters were all removed. The potato was just filler. Again, a tasty dish, but not quite the hyped dish I'd read about and certainly not something I'd be fighting my way onto the number 36 bus for.

At £20, including beer and tip, Silk Road is a crazy steal. Try as you might, you couldn't spend more than £30 there, nor could you come away hungry. The dishes are cheap and generous and the service fast. The fact that's it's full of Chinese diners and trendy South Londoners is fairly revealing - they're clearly a restaurant appreciated by all. Just be a little careful on the spice rating, however. The one chilli seemed hot enough to melt my mouth (which doesn't take a lot, to be fair), who knows what the three chilli would do.