Driving 982km in one day just for a single day of celebration could be seen as madness. When the reason is Oktoberfest, it is not. 6 million revellers agree and travel from across the world for the 16-day festival, at which they celebrate I'm not quite sure what.

Beer is delivered as a 1-litre serving (a maß), directly to your table by friendly waitress' in traditional attire. Many visitors start drinking at 10.00am and don't finish until 11.00pm, by which time they're standing on the table linked arm and arm with complete strangers and singing along to Queen. 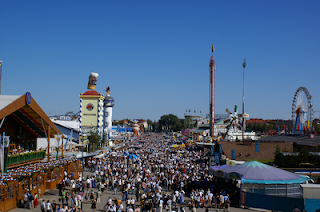 Munich as a city is renowned for it's beer and it's beer houses. Spending one day at Oktoberfest doesn't give you much chance to sample many of the beers - usually just too much of one. We chose Hofbräu Oktoberfestbier (6.3%) from Hofbräuhaus. A mild tasting lager, which remains cold for the life of the beer due to the thick glass stein in which all Oktoberfest beer is served. 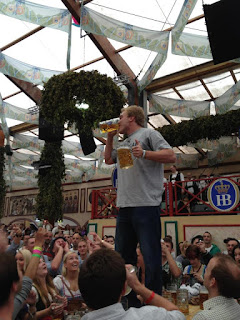 If you can avoid the temptation to go overboard on the beer, there are plenty of other attractions to see outside the tents. The typically efficient U-Bhan - the Munich subway train - is ever-waiting to whisk you back home. We may not be back next year, but this won't be the last trip to Oktoberfest.