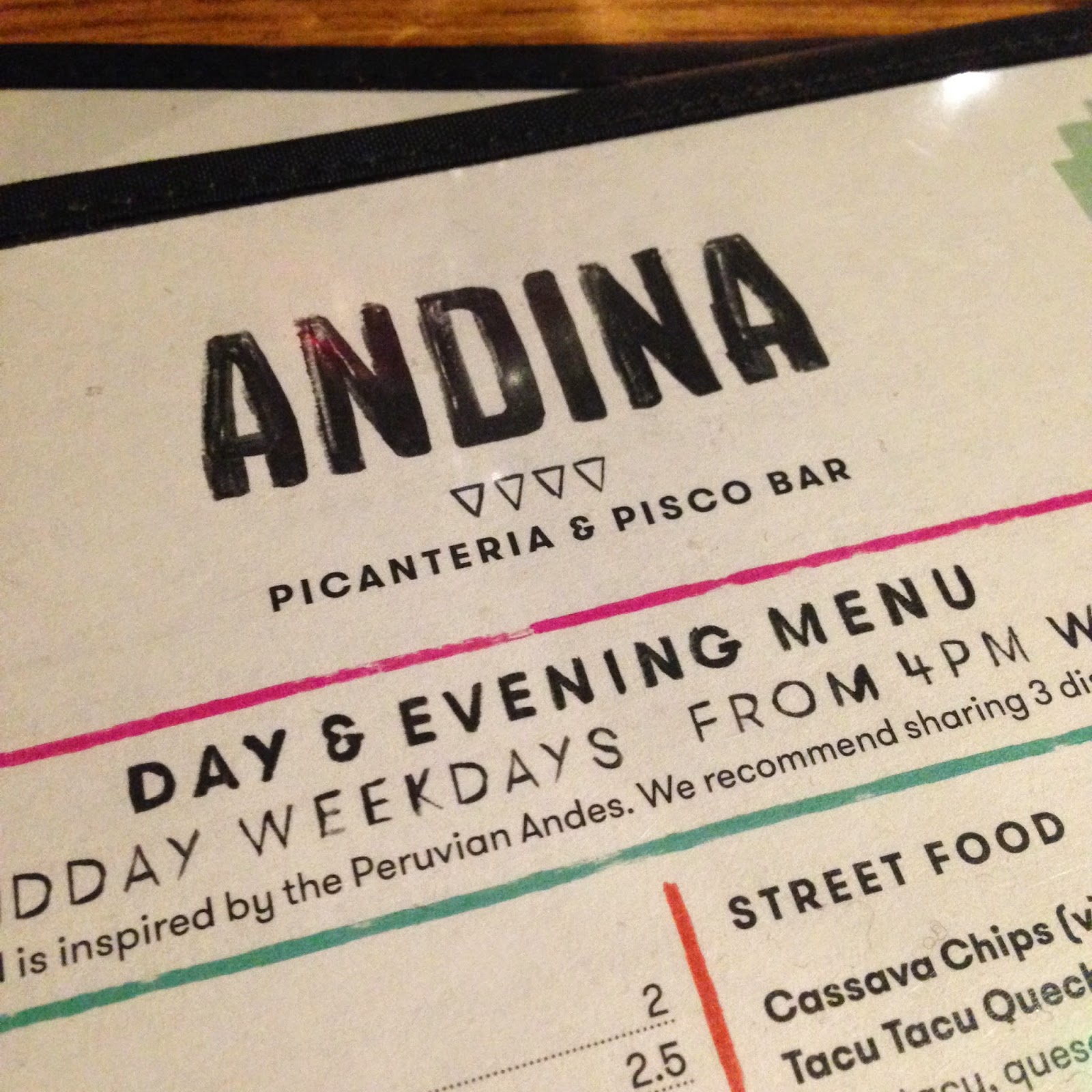 Every cuisine seems to get its fifteen minutes of fame. I'm sure I've said that many times before, but it's true. Peruvian had it's spell of glory last year and/or the year before. It's on the wane now - or at least it is based on anecdotal Twitter evidence.

Andina is a Peruvian restaurant that appeared at the height of the glory. A very sensible thing to do: strike while the iron is hot, way before ASDA start selling Peruvian microwave meals and the hipsters flee faster than Lib Dem voters on polling day.

If I wanted to be a proper food blogger, I should go to these place when they're at their hippest, queue in the wind, rain, and boiling-hot sun just to get some pics up on Instagram way before anyone else.

By the time I finally visited, the wave of euphoria had swept through and most people I know had been and gone.

That's probably for the best.

Perhaps during the height of the hype these guys were on fire - or that hype was so great everyone was blinded to any issues. Regardless, I was fairly disappointed by Andina.

For a start, the staff seemed a little clueless - not for the first time in a Peruvian restaurant, I might add. Our waitress either couldn't hear us or couldn't understand us, we were bombarded with drinks and dishes that weren't ours, and getting hold of water was like trying to squeeze it from a stone.

Not great really, on what was a reasonable quiet Tuesday night.

The food wasn't fantastic either. I expected some flare to the dishes - something to really set them apart and justify the wealth of praise. I didn't find much.

The duck ceviche sounded interesting, but it could have been any meat really - the delicate taste overwhelmed by whatever the sauce was.

The octopus delivered some wow. Served as a whole tentacle on a small plate, it captured that look of an alien that only an octopus can manage. Impressive and tasty. Is that too much to ask from the other dishes?

I didn't photograph much of the rest and I'm not going to write about it either. Meh sums it up pretty well. The Pisco sour was very good - the best I've had, in fact - but I'd recommend anyone visiting to stick to the drink and skip the food.

Do I have to summarise? I'm not sure. I'm suppose I do for those one or two who scrolled to the bottom of the article. Overall, Andina was average at best - and I really really wanted to like this place, especially after all I heard. Parking was ample.