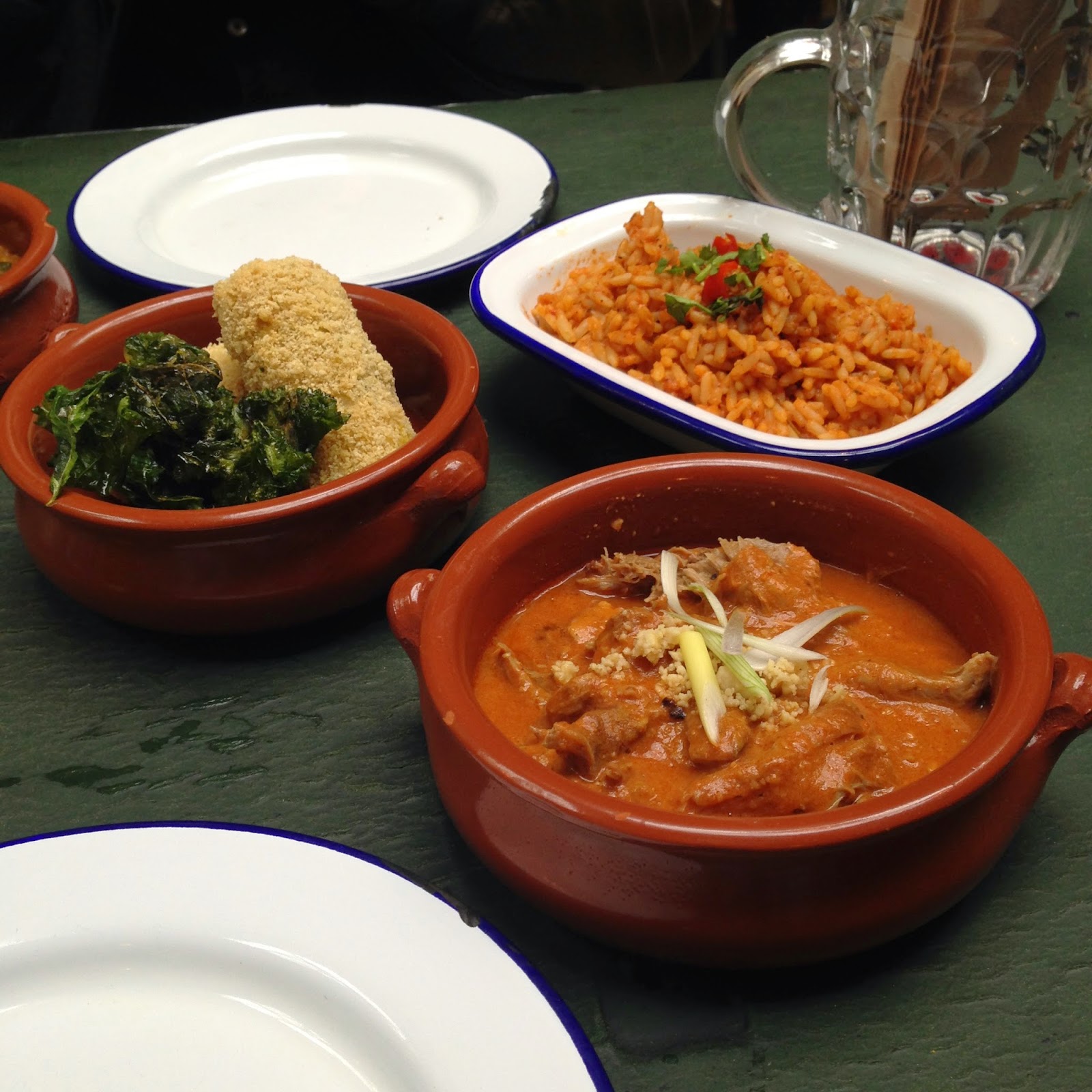 
“The only bad review you gave was to a slice of pizza you found under the couch.”
- The Simpsons, AABF21

I sometimes worry that one day I’ll run out of things to write about. Then I come to my senses and realise it’s unlikely for a loudmouth like me, who can’t resist telling everyone everything.

I mean, I once wrote about a 99p Pret coffee and today was tempted to review a bag of Wotsits. Does that sound like the behaviour of someone running out of things to say?

Given the dull subject matter, possibly is the answer -  but I’ll take it as a sign that my brain will always find something to spew out on a page. If it doesn’t, I’ll just follow the popular blogger trait of describing my dinner with ‘AMAZING!!!!!’ inserted as every sixth word.

On this lazy bank holiday that consisted of nothing more than working and staring out of the window like a bored cat (AMAZING!!!), I resolved to leave the flat at least once.

Dashing out of the door late and stepping over the mounds of rubbish that litter the streets of South London, I noticed an empty bottle of Glenfiddich 12 year old rolling about on the floor - a clearer sign as any that this area is on the up.

That’s a lie - the bottle was actually there today, but it’s as neat a segue as I can think of after a glass of that same whisky and I’ll be damned if I’m letting the truth stand in the way of a half-good half-baked story.

Another sign that a place is on the up is the number of decent eateries within a couple of tube stops (segue or what?! Boom!). The King & Co in Clapham has added itself to that list with previously excellent pop-up kitchens from Donostia Social Club and BahBah Persian Kitchen. Where DO they get these names? 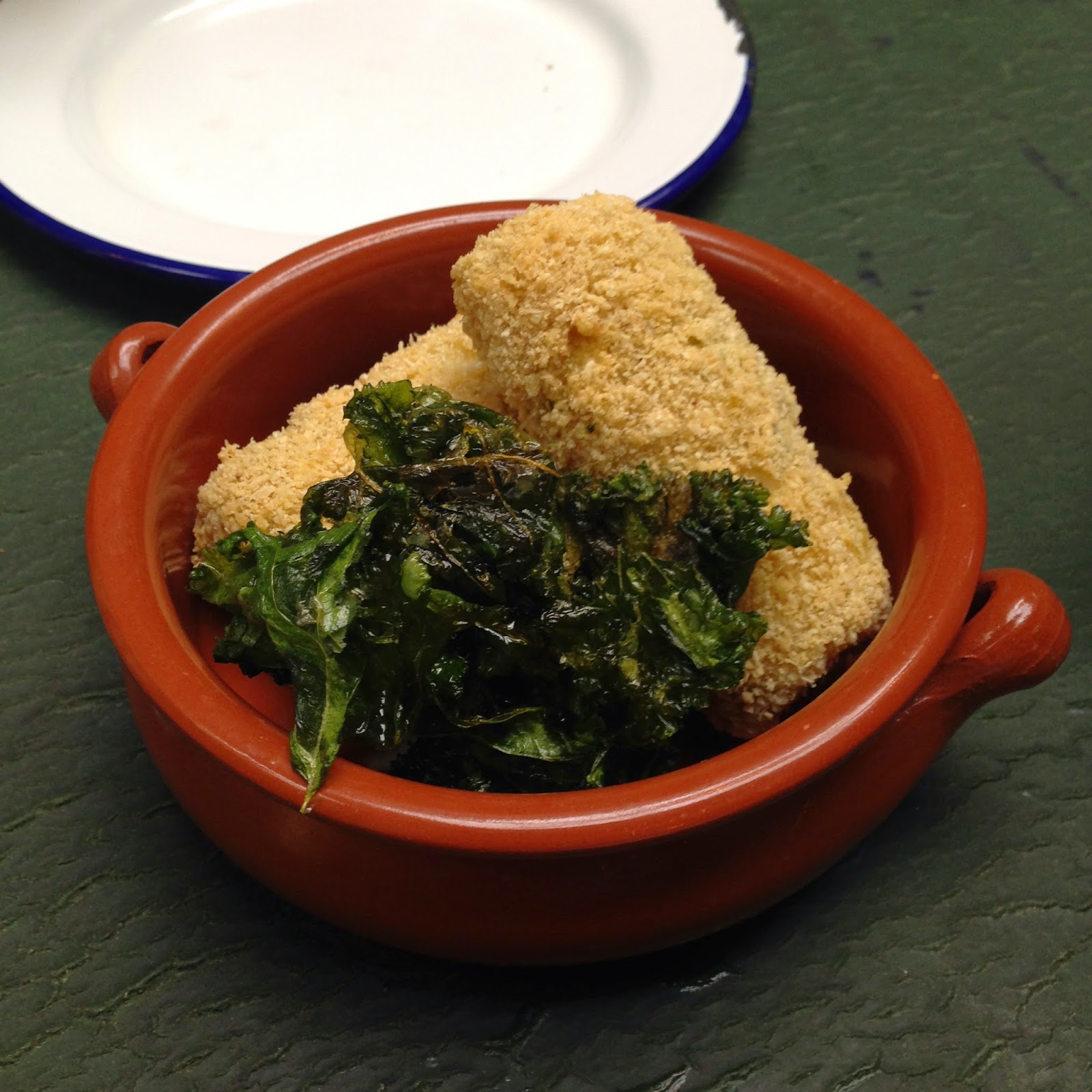 Now it’s time for Zoe’s Ghana Kitchen to impress the locals of South West London - or a local and his mate who lives over East somewhere. There we sat, at the back of the pub, ciders in hand, eating our dinner over candlelight. A picturesque scene, if it weren’t for us two in it.

Zoe’s Ghana Kitchen is a proper sharing experience. Small plates cover the table and you’re forever leaning across each other’s laps, dipping your elbow into some sort of red goo. All very continental. Adam’s a vegetarian though, so I had little chance to share, instead stocking up on two meat dishes and splitting a rice. 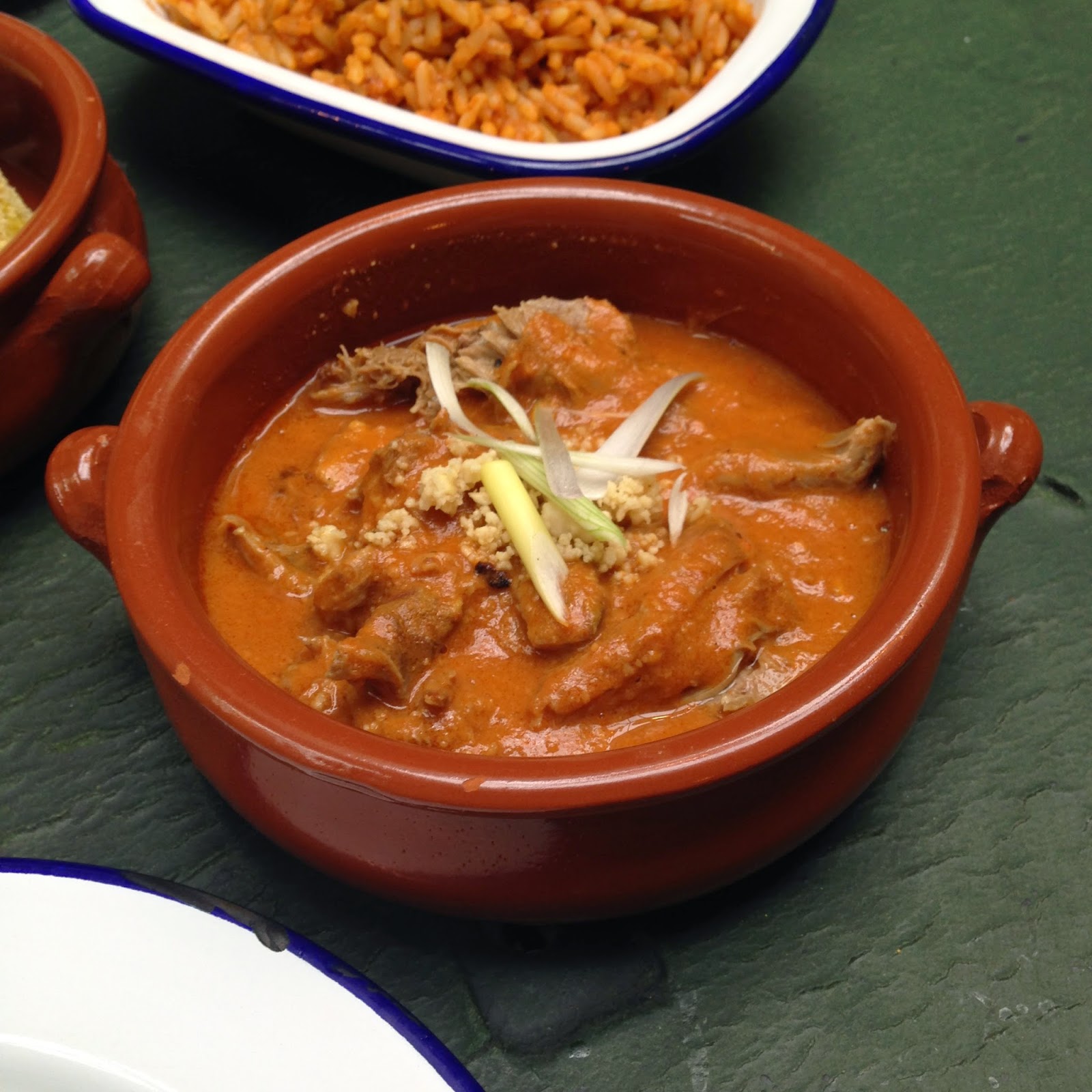 Peanut butter stew with mutton. You’re not going to find that in many places, granted; but you should. A bowl of deep earthy flavours, the mutton fell apart into tiny strands, so small you could probably hide them in a vegetarians jollof rice and get away with it (joke!). The heat here is a builder - not the tongue flashing tang of a fresh chili, but the complex spice of an assortment of powders, cooked and left to stew - AMAZING!!!. Bring me two bowls of this and I’m done. 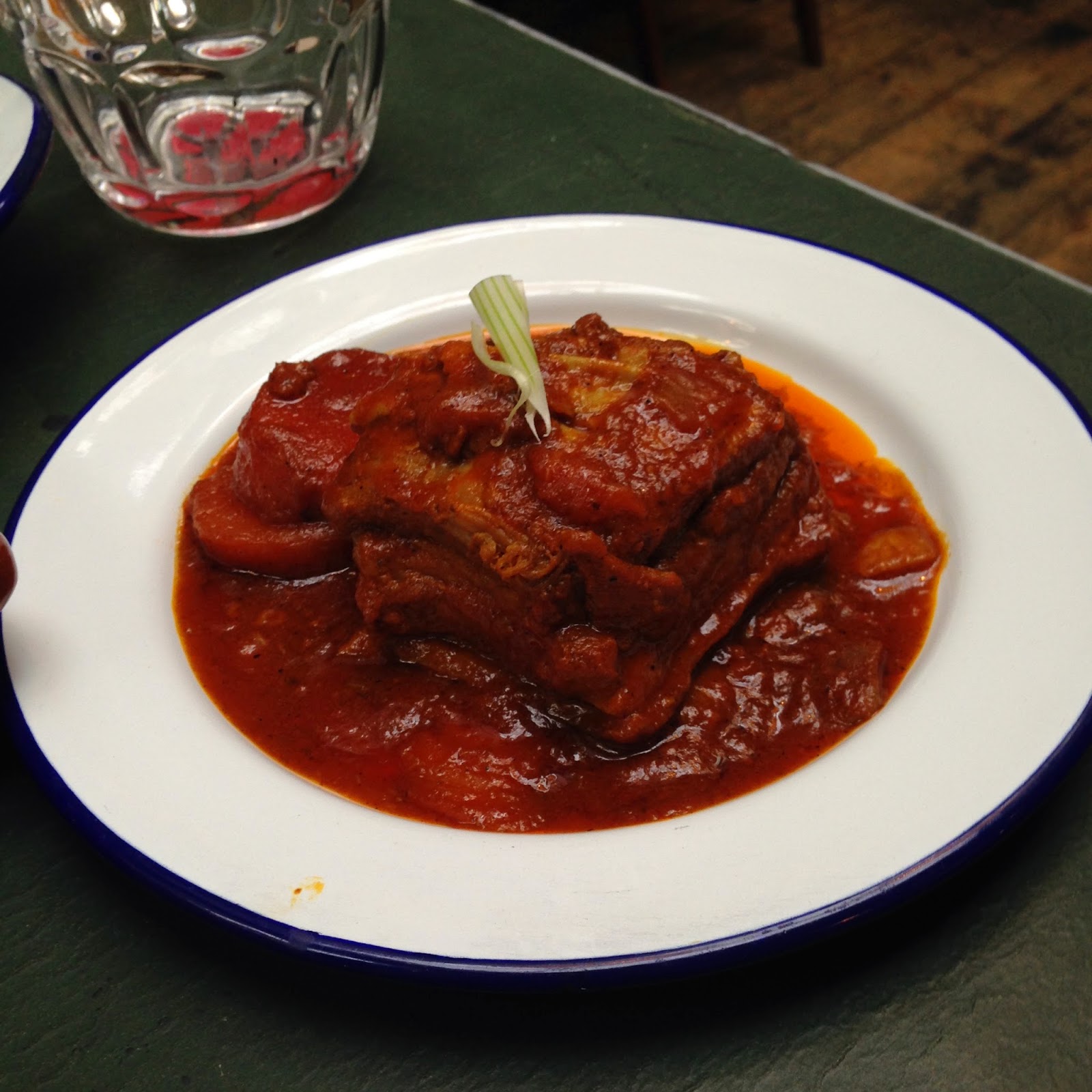 I wasn’t done though as the mutton was joined by a friendly pig, whose belly had been slow-roasted until it too fell into thin delicate strands. The sauce looked hot. That fiery red colour of intense spice covered in a layer of oil that burns instead of lubricates. It wasn’t though. There was heat here, yet it was another builder. Drink a pint of this and you’ll struggle; eat a single dish and even I (yes Jacki, even I) had barely broken a sweat. 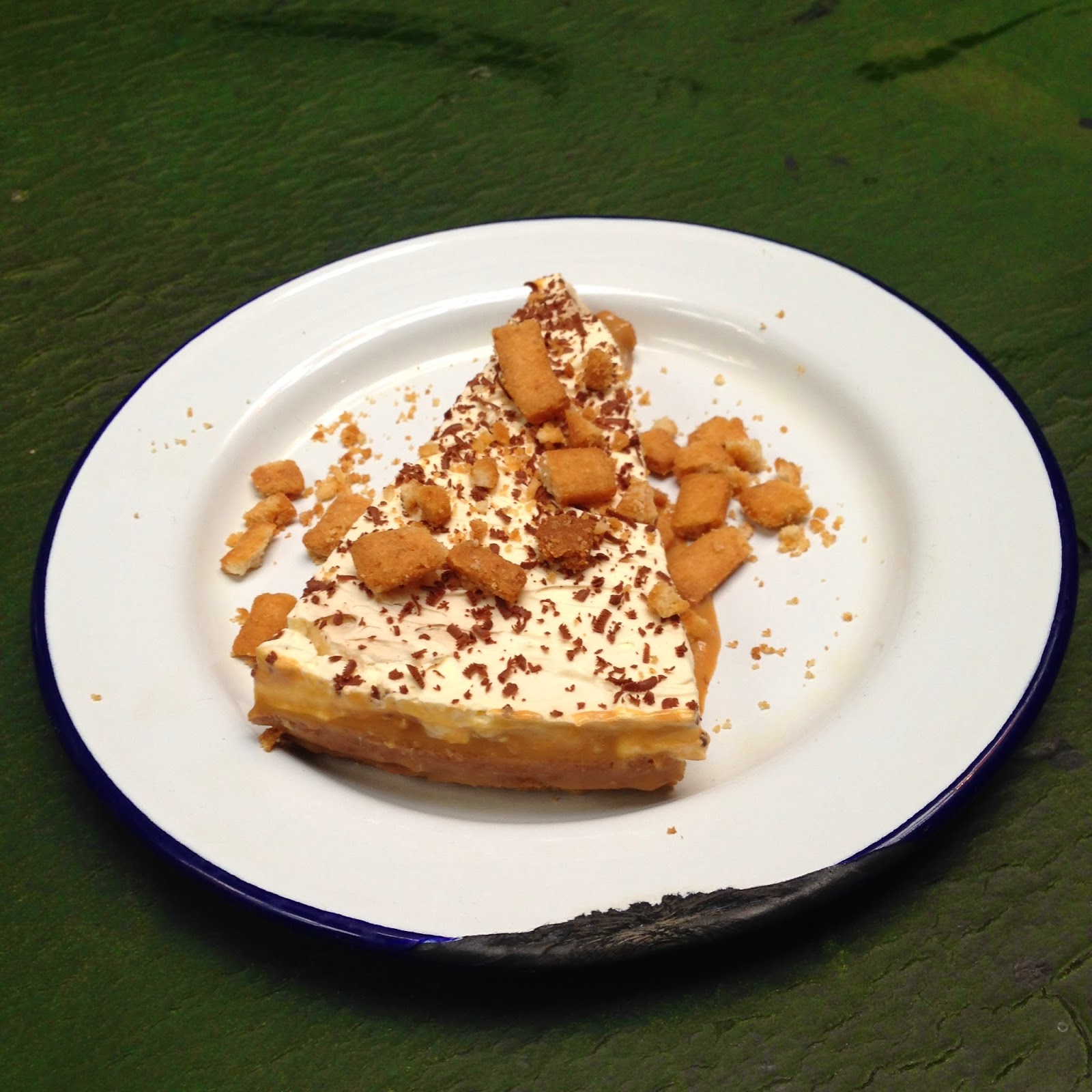 All the same the meal had to end with a pudding: banoffee pie covered in chin chin. What in God’s name that is, I don’t know. Some sort of crumbled biscuit, that they dusted across the top of my creamy, bananery, toffee goodness. I’m not sure it added much, but then I wolfed the whole thing down so fast I would never have noticed. Delicious the pudding was and not one to be eaten slowly - as if a pudding ever is.

Zoe’s Ghana Kitchen is here for a little while longer before she opens up a place in Brixton. Go here, go there, it doesn’t matter, just go - it’s AMAZING!!! And I do genuinely mean that.